The LGBT Center began as a small haven for gay, lesbian, bisexual and transgender students a few decades ago. Today, we’re a valued resource on an increasingly diverse campus. We’ve gone through plenty – from the early and often lonely strides of activist Jim Chalgren to the campus celebrating being listed in The Advocate’s top 100 LGBT-friendly universities. We remain committed to maintaining a peaceful and comfortable environment for students to achieve their goals. To that end, we organize a number of community events, education panels and more. 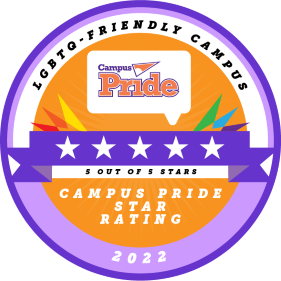 It is our mission to provide support, advocacy, and a sense of community to LGBT* students. Through education, programming, and activism, we heighten campus and community awareness of LGBT* concerns and strive to ensure every individual has equal opportunity to learn, work, and grow in a supportive and safe environment.

*LGBT* stands for lesbian, gay, bisexual, and transgender. The "*" is to signify the diversity and inclusiveness of all gender & sexual identities that include, but are not limited to: queer, questioning, asexual, non-binary, pansexual, intersex, and allied individuals.

The Alternative Lifestyles Office was founded in 1977, making it the second center of its kind on a college of university campus. The founder was Jim Chalgren, a graduate student in the Counseling and Student Personnel program. Jim went on to live a heroic life as an AIDS and LGBT activist. In Jim's memory, the Jim Chalgren Award was created. This award is given to one student, staff, or faculty person who has acted as a visible and courageous supporter of the LGBT community and the LGBT Center.

In 1994, the Center's name was changed to the Lesbian, Gay, Bisexual Center. The word Transgender was officially added to the center's name in the fall of 2002.

From 1977 to 2004, the LGBT Center was staffed with only a part-time graduate assistant and student volunteers. In the spring of 2003, Jess Crary led the fight for a full time director. Following a powerful sit-in at the President's office, the students were finally heard. Jessica Flatequal was hired as the full time coordinator in October 2004.

On November 20, 2008 the LGBT Center was dedicated to our founder and LGBT rights activist Jim Chalgren.

We are now an independent office of the University, located in the Centennial Student Union in the division of Academic Affairs.