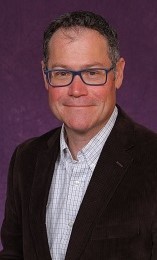 Martensen said Corley’s experience as director of the Honors Program, faculty chair of the Department of History, work leading University-wide assessment and evaluation processes have prepared him well to serve as the dean of library and learning.

“Dr. Corley has been a passionate user of, and advocate for, libraries, archives and student engagement his entire career,” said Martensen. “Dr. Corley has demonstrated continued commitment to developing our library as a learning commons and center for intellectual inquiry on behalf of the entire campus and the Greater Mankato community.”

Prior to joining Minnesota State Mankato in 2004, Corley held career appointments at Minnesota State University Moorhead and graduate assistantships and fellowships and affiliations with the Purdue Research Foundation and Centre Georges Chevrier at the Université de Bourgogne, in Dijon, France.

Corley earned doctorate and master’s degrees in history from Purdue University, in West Lafayette, Indiana. He earned a bachelor’s degree in history and philosophy from Bloomsburg University of Pennsylvania while a student in the university’s honors program.