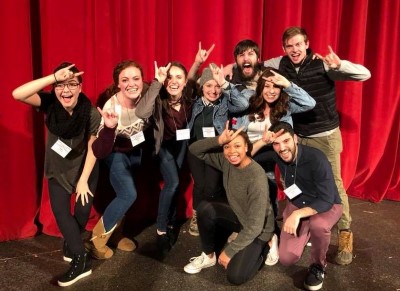 MANKATO, Minn. – Five of the 16 finalists at the Kennedy Center American College Theater Festival Region V competition in Des Moines last week were students of Minnesota State University, Mankato’s Department of Theatre and Dance. That is the most finalists for the department in about 20 years.

The department participated along with 1,464 registrants, representing 85 colleges and universities during festival week, Jan. 21-27. Region V represents Minnesota, North Dakota, South Dakota, Nebraska, Iowa, Kansas and Missouri, and its regional festival is the largest of the eight in the country.

Staples won an invitation for presentation for her 10-minute Protest Play: “Ignorant Silence.” Seth Honerman (1st year MFA theatre directing from Sioux Falls, S.D.) was the runner up for the Society for Directors and Choreographers Award.

KCACTF certificates of commendation for past productions at Minnesota State Mankato were awarded to: Jayme Caye Beerling (BFA design/technology from Prior Lake, Minn.) for scenic design for “The Game’s Afoot”; and to Blake Bruns (former student from Nicollet, Minn.) for lighting design for “The Glass Menagerie.”

Hustoles continues his service to Region V by being on the regional advisory board and served as the festival registrar for this, his 18th time.