Mankato, Minn. – Minnesota State University, Mankato President Richard Davenport announced that Minnesota State Mankato signed a “Memorandum of Understanding” with the government of Costa Rica’s Ministry of Foreign Affairs on Monday in San Jose, Costa Rica, that will allow the University to broadly work with two Costa Rica universities on a variety of mutually beneficial activities.

Provost and Senior Vice President for Academic Affairs Marilyn Wells traveled to Costa Rica with three other University administrators and signed the memorandum of understanding on behalf of Minnesota State Mankato at a ceremony attended by government, business and higher education leaders from Costa Rica.

Signing the memorandum of understanding for the government of Costa Rica was Chancellor Manuel González Sanz. Signing as an honorary witness was Costa Rica Vice President Ana Helena Chacón Echeverría, who was serving as the acting president for the Republic of Costa Rica on Monday.

Davenport said the largely ceremonial signing was purposely broad and would permit the Minnesota State Mankato delegation, led by Wells, to discuss next steps in implementing the agreement and plan a reciprocal visit to Mankato, Minn., by a Costa Rican delegation.

Davenport said the agreement allows the partners to undertake activities that support student, staff and faculty mobility; promotes the exchange of information, research, and ideas; contributes to the development of human capital through education and training; and increases collaboration across the education, business, and government sectors. 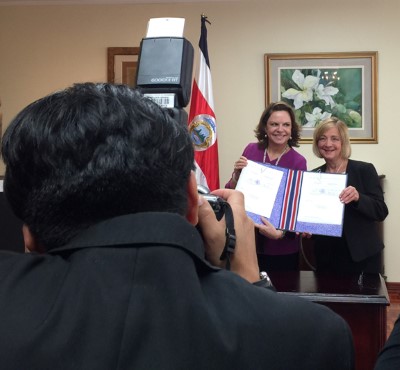 “On behalf of Minnesota State University, Mankato in the state of Minnesota in the United States of America, I am honored to sign this ‘Memorandum of Understanding’ with the government of Costa Rica. Beginning with the vision of Vice President Ana Helena Chacón Echeverría for women’s rights, equality, and social development, we look forward with great enthusiasm to strengthening our existing collaborations and to providing new opportunities for sharing in the areas of education, economic development, academic research, and culture. We recognize the broader benefits of internationalization and we share common goals. So, we are excited about the big ideas and achievements for Costa Rica and Minnesota State University, Mankato that will emerge from the signing of this ‘Memorandum of Understanding’ today. Thank you to all who have contributed to our being here today. We look forward to welcoming return delegations of government, academic, business, and industry leaders to Minnesota State University, Mankato in the coming months and years.”

For more information about the memorandum of understanding between Minnesota State Mankato and the government of Costa Rica, contact Wells on Wednesday by calling the Office of the Provost at 507-389-1333. Stoynoff may be contacted Thursday by calling Global Education at 507-389-2900.

Minnesota State Mankato, a comprehensive university with 15,110 students, is part of the Minnesota State system, which comprises 31 state institutions.