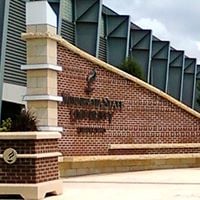 Located at the intersection of Ellis Avenue and Stadium Road welcomes the University community and its visitors and guests. The Gateway adds an aesthetic to our beautiful campus. The corner sidewalk is wide and inviting, and the brick and limestone sign, accented with LED lights looks great both day and night. 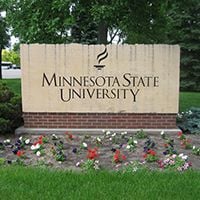 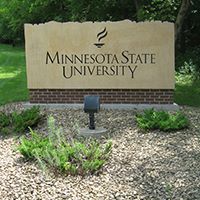 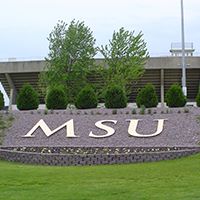 At the intersection of Warren Street and Stadium Road, in an effort to enhance the corner where Blakeslee Stadium is located, a giant mound was created in 2001 to provide yet another aesthetic treatment of the campus grounds. 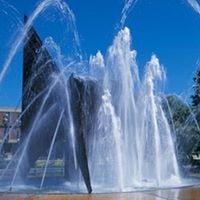 Located on the mall between the Centennial Student Union and Memorial Library, the fountain came from part of the New York City World Fair (1965) and was installed in 1969. It was designed to create a spiral effect with stationary water jets. The sculpture in the fountain was not originally part of the work. The sculpture, by Roger Johnson, a former faculty member in the Art Department, was added in 1975. The fountain underwent major renovation in 2013. 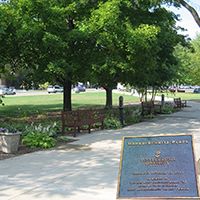 Made possible by a gift from Minnesota State Mankato Foundation president Mary Marso-Schmitz ('68), the plaza creates a place for students to relax, study, and meet others. Its design allows for outdoor music performances, as well as community and University events and receptions. You'll find this plaza in front of the Performing Arts building. 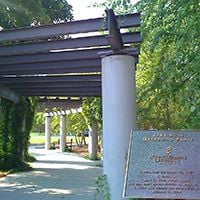 The Jane Rush Gathering Place was created to honor the late Jane Rush's contributions to campus life. Features include an arbor, which is located over the western sidewalk of the plaza, and a small cupola located in the arbor's center. You'll find the Gathering Place in front of the Performing Arts building. 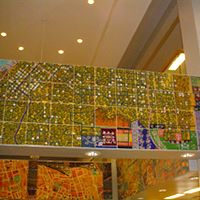 Around the World on the 44th Parallel

In three sets of four panels each, Joyce Kozloff depicts cities located near the 44th parallel around the globe. Each four by seventeen-foot panel is composed of foot-square ceramic tiles. The project was commissioned through the Minnesota Percent for Art in Public Places, sponsored by the Minnesota State Arts Board. The work was created at the Tile Guild in Los Angeles and installed in Memorial Library in June, 1995. 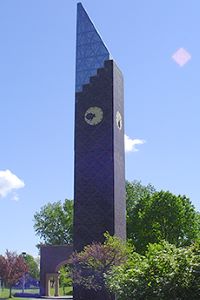 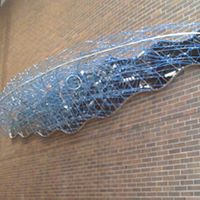 Artist Brower Hatcher created the Gravity Wave in the form of a wave, a gravity wave. A warp in the fabric of space-time appears to deform and dematerialize the brick wall of the Ford Hall. Black glass against the wall at the back of the sculpture reflects layers and objects within the structural matrix which creates the illusion of a hole through the wall. Successive layers of transparent structural "shock waves" project beyond the wall into the Ford Hall lobby. Embedded within these "shock waves" are an array of objects representative of the disciplines and fields of biochemistry, molecular biology, envirnomental biology, biology, botany, astronomy, geology, engineering, chemistry and environmental science. The network of connectivity between the variety of representative components reinforce the ideology that all disciplines are interrelated and that these elements and this progressive combination create a worldview in which knowledge is displayed as a network. This sculpture attempts to combine scientific and artistic concepts into a unified matrix that represents inquiry, observation and analysis and to provocatively announce the wide range of scientific inquiry done within Leonard A. Ford Hall to faculty, students, and visitors.

This artwork was dedicated in December, 1990, following the remodeling and expansion of Wiecking Center (formerly Wilson Campus School). Artist Joyce Marguess Carey designed the piece, recognizing that much of the remodeling centered on the Department of Family and Consumer Sciences, and the Children’s House. (Both programs share the east wing of Wiecking Center.) The theme deals with children learning how to build and create new things with their hands and minds. 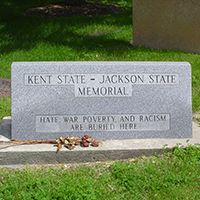 The memorial on the northwest corner of Morris Hall was dedicated in 1972 in memory of the students who were killed in the Kent State-Jackson State protests in 1970, which were triggered by President Richard Nixon's decision to invade North Vietnamese military sanctuaries in Camboda which had been used as supply and staging areas against American and South Vietnamese troops in the Vietnam War. It states, "HATE, WAR, POVERTY AND RACISM ARE BURIED HERE." Mankato attorney Mark Halvorson, at that time a student leader and member of the campus People's Party, was instrumental in the 1970s in getting the memorial stone cut and placed on campus. 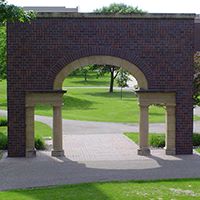 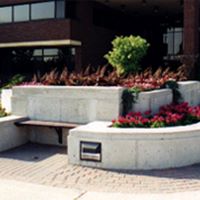 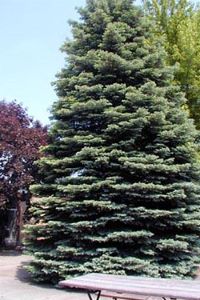 Located in Wiecking Center’s open courtyard, "Shurson Garden" was dedicated October 18, 1996, and named after Judy Shurson. Judy, who died after a nine month battle with cancer, was a respected and well-liked classified employee who served the University for 14 years in various capacities as Theatre Arts Business Manager, and finally as office manager and job order controller for Printing Services. Judy helped transform the neglected Wiecking Center courtyard into one full of flowering plants.

Shurson Garden is maintained by high school students in the Upward Bound Program with supervision provided by volunteers from Upward Bound.

The black, cement cast spheres located at the east entrance of the Trafton Science Center were created in 1993 by Janet Lofquist. The space is graded into an amphitheater-like setting offering a welcoming entrance to the building. 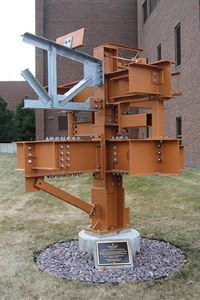 The Steel Sculpture and its 50 different connections (bolts and welds) is intended to help Minnesota State Mankato civil engineering students learn about typical connections as part of their steel design course, and to help other students and the public better understand the role of the civil engineer in society. It is located on the east side of Trafton East.

In 1983, the Vietnam War Memorial, located on the southeast corner of Memorial Library, was dedicated by the Minnesota State Mankato Vets Club to the veterans of the Vietnam War. The inscription, "For those who fought for it, freedom has a taste the protected will never know," was submitted by John Domeier, a Vietnam veteran; the actual author is unknown. The memorial was designed by Mark Dragan, at that time a junior at Mankato State Mankato, and a veteran of the United States Air Force. 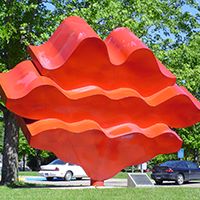 This red steel sculpture, titled Waves was designed by Arnoldus Grüter, and fabricated at Jones Metal Products in Mankato. It is located near Memorial Library on the Minnesota State Mankato mall. In the artists words, Waves symbolizes in static form the dynamic action of the ocean and a university. This sculpture was built in honor of Jerry W. Berger, a Mankato State graduate student who was killed in a 1969 industrial accident. 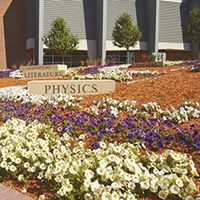 St. Paul sculptor Steven Woodward created this set of eight massive limestone blocks set in grassy berms at the corner of Stadium Road and Ellis Avenue next to the Otto Recreation Center. The amphitheater-like space is a "sculptural landform" as Woodward describes it, and the hulking stones aren't the only clues that it is a work of art. Most of the four-ton blocks are etched with the names of academic disciplines: "Philosophy," "Literature," "Physics," "Theatre," "Astronomy," "Geology," "History." Two of the words - "Philosophy" and "Geology" - are upside down. And one of the stones is blank. Those seeming incongruities have some people asking "Why?" "It's not an in-your-face sculpture. It makes you think. That's the point of an university. The sculptures are foundation blocks, metaphorically reflecting the mission of the university as books nestled within the terraces, and steps and platforms to actively engage the students in a landscape of learning," Woodward explained. The name "Pillars" reflects the students who will physically and conceptually acivate the work," he added. "They are the pillars. The University teaches students to turn a discipline upside down, inside out - to know the discipline thoroughly and from every angle," Woodward said of the inverted words. The blank block represents all of the disciplines that aren't mentioned - "a book open for investigation." 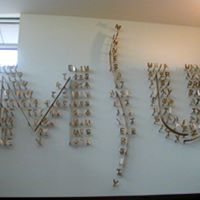 The public artwork, located in three separate sites within Highland Center, is called Letterdance and was created to reflect and enhance the internationally diverse community of Minnesota State Mankato. Letterdance is made of stainless steel, bronze and brass, and was made by Alexander Tylevich, from Saint Paul, Minnesota, who was paid $112,725 for his services, this represents almost 1% of the $11 Million dollar construction costs for Taylor Center.

The student lounge site includes colored and stainless cables holding an array of small scale images - letters of different alphabets of the languages spoken at Minnesota State Mankato, and a floor design with numerals and translucent glass like strips.

The corridor site has stainless cables which visually interplay with the lines of the track field and incorporate the university's sport song. The wall mounted site forms the abreviation (MSU) and is created by many repetitions of "Minnesota", "State" and "University". 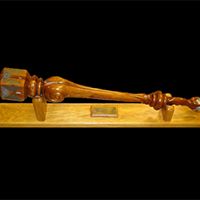 Made entirely from Minnesota materials in recognition of the value and beauty of the state's natural resources and people, the mace symbolizes both the university's power to overcome ignorance and prejuidice by seeking truth, and the power of the university's president to protect the university and its community from forces opposed to its goals. The mace is carried in each graduation ceremony, and was commissioned and donated to Mankato State by Fred and Karin Block. The mace was created by Phil Swan, a Mankato State University alumnus from Prior Lake, Minn. 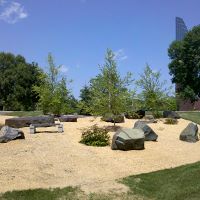 The Rock Garden surrounds Ford Hall. All 82 rock specimens have been taken from each of the counties of Minnesota. This garden isn't just a sight to look at, but individuals can take a break or study at benches or grass patches scattered throughout the garden. 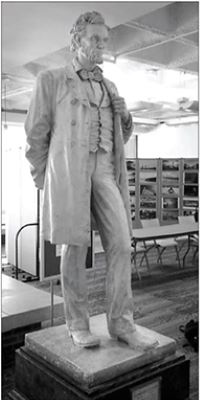 The statue of Abraham Lincoln, which stands in Centennial Student Union has a longtime association with the university. The landmark has been on campus since 1926, according to Minnesota State Mankato archives. Campus Planner Ira Johnson, tired of the Abe's head disappearing from time to time, in the 1970s glued it on permanently to stop the pranks. 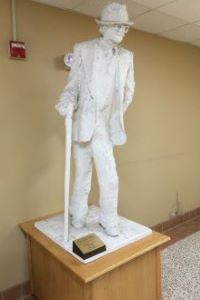 The statue of The Old Man, which has graced the halls of Wiecking Center since 1983, was the creation of Instructor Kristy Mondell's Upward Bound sculpture class. It remains the only class project which morphed into a "go see" piece of University history located on the north end of the campus. 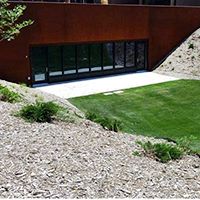 The Amphitheatre is located between Memorial Library and the Centennial Student Union. The glass windows at its base are part of the tunnel connection between the library and student union. 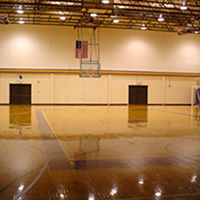 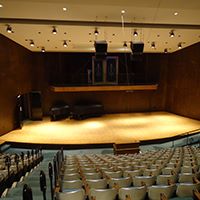 Located in the Performing Arts Building, Elias. J. Halling came to Mankato State Mankato (then Mankato State Teachers College) as a vocal music teacher in 1936 and became prominent in Minnesota as a director of Mankato State choral groups, including the Madrigal Singers which he founded. 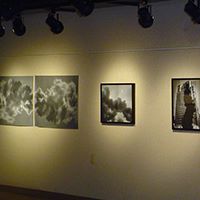 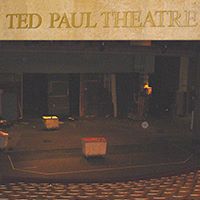 Located in the Performing Arts building, the theatre was named in honor of professor of theatre arts and former chairperson of the Theatre Arts Department, the theatre is used for all main stage theatre productions. 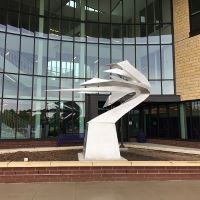 Installed outside of the Clinical Sciences building August 2018. "Toward Tomorrow is a linear projectile that is defined by the receding lines, and the suspended interior portion provides a sense of weightlessness. The form can become relatable when seen in relation to the self, and in that way connections can be made between ourselves and the space that we occupy." - Tommy Riefe Sculptor 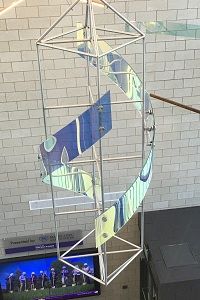 Installed inside of the Clinical Sciences building Fall 2018. Aleander Tylevich’s spiral artwork moves and seems ever changing, and, depending on what angle you view it from, the piece projects something new. Separated it means little, but as a continuous whole it engages the imagination, not unlike life itself. 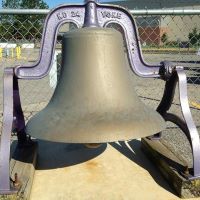